It’s official I finished the Outfit Along….. a month late….but I finished 🙂 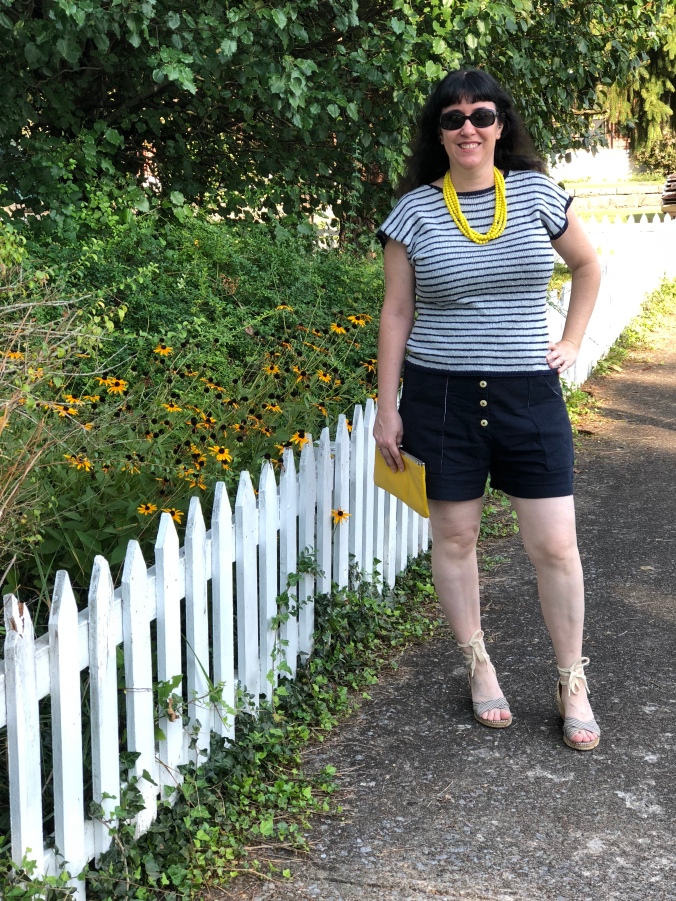 I stuck very true to the Outfit Along and made the suggested True Bias Lander Pants…. or in my case shorts… and knit the Waters top.

I’ll start with the shorts… 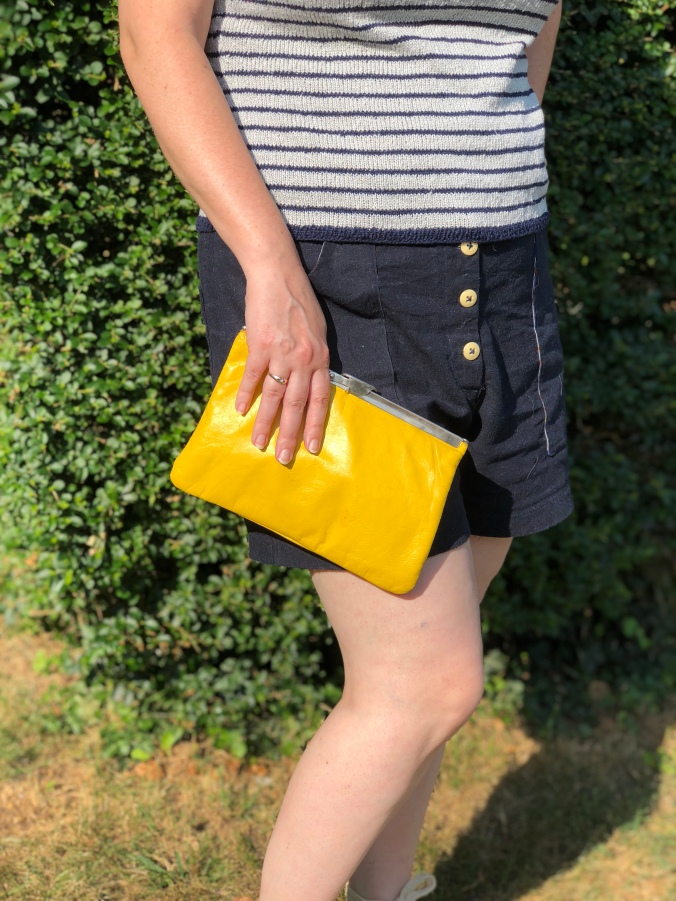 This was my first time using a True Bias pattern and I was SUPER pleased with it!  I cut a size __ and it pretty much fit right out of the envelope….which never happens!!  I’ve had the chance to wear them a few times and I may want to adjust the crotch depth the next time I make them, but that may be partially due to my fabric choices (see below!).
I used the Lander Sewalong extensively and it proved quite helpful!  I also used Lladybird’s method for the belt loops, which was much easier than the tube turning mess. 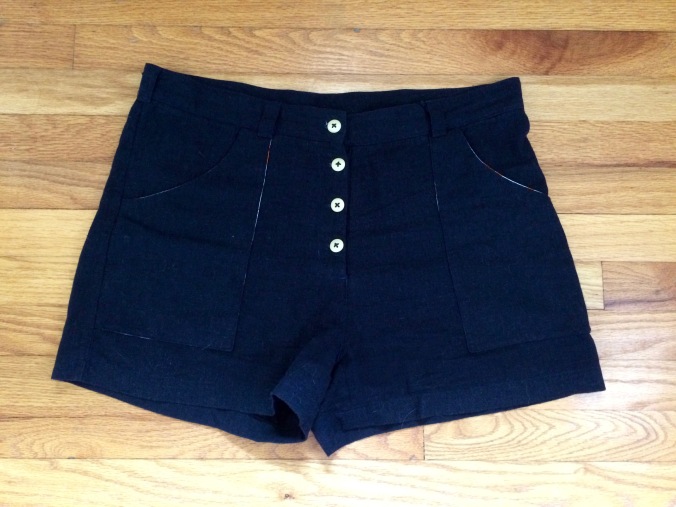 Now while the fit was more or less fantastic I may have messed up on the fabric 😦  I used the discount code and bought Robert Kaufman Brussels Washer Linen in Navy from The Confident Stitch.  The fabric is really nice…..but has a tendency to bag out (and wrinkle, but it is still a linen) and was really probably not the best for these more structured shorts.  Which I have just now realized they specifically warned about in the description <facepalm>  When I remake them I’ll probably do it in a nice twill 🙂 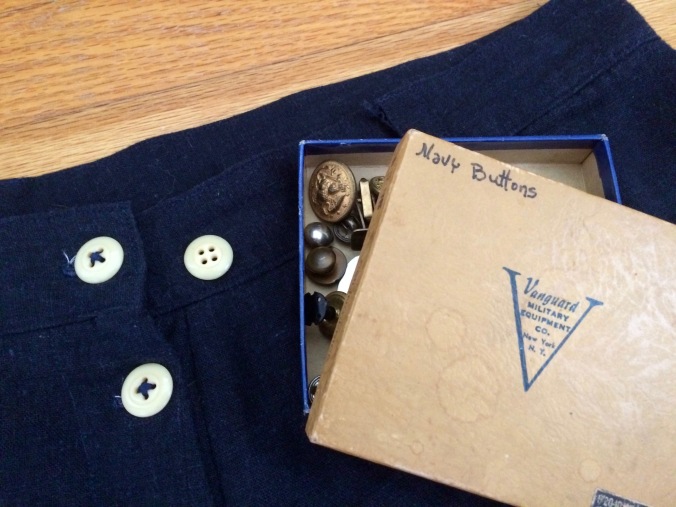 Now I did take this up a notch by using really special buttons…. so special in fact I will probably move them on to the new pair of shorts when I re-make them.  These buttons came from my Grandpa’s Navy uniform who served during World War II!  My Mom gave me an old box labeled “Navy Buttons” and I found these among the more obvious eagle and anchor Navy buttons.  I know his actual uniform was destroyed in a flood, but I think someone may have gone through and cut all the buttons off it before tossing it.   I can’t tell what they’re made of, but they are quite solid and sturdy. [FYI: They got really blown out in these photos, the true color is closer to the outdoor shots- kinda of a linen/off white.] 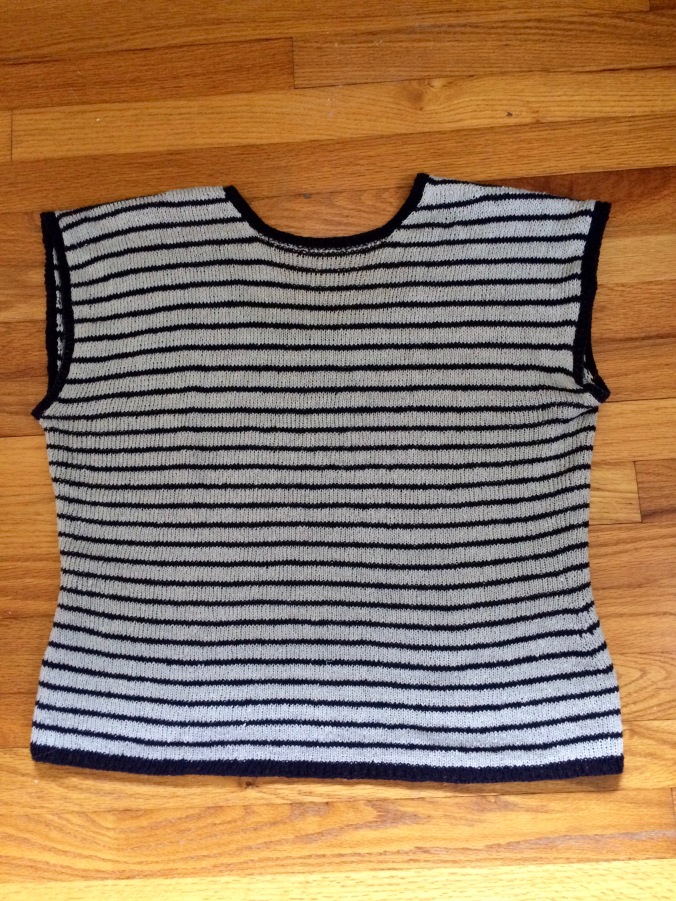 Now on to the top!  I was originally planning on making Zinone (even had yarn & color scheme picked out), but when Andi released Waters and it was on sale…. I immediately changed plans! [Also, I FINALLY actually bought one of her patterns and so can stop feeling guilty about being a freeloader.] 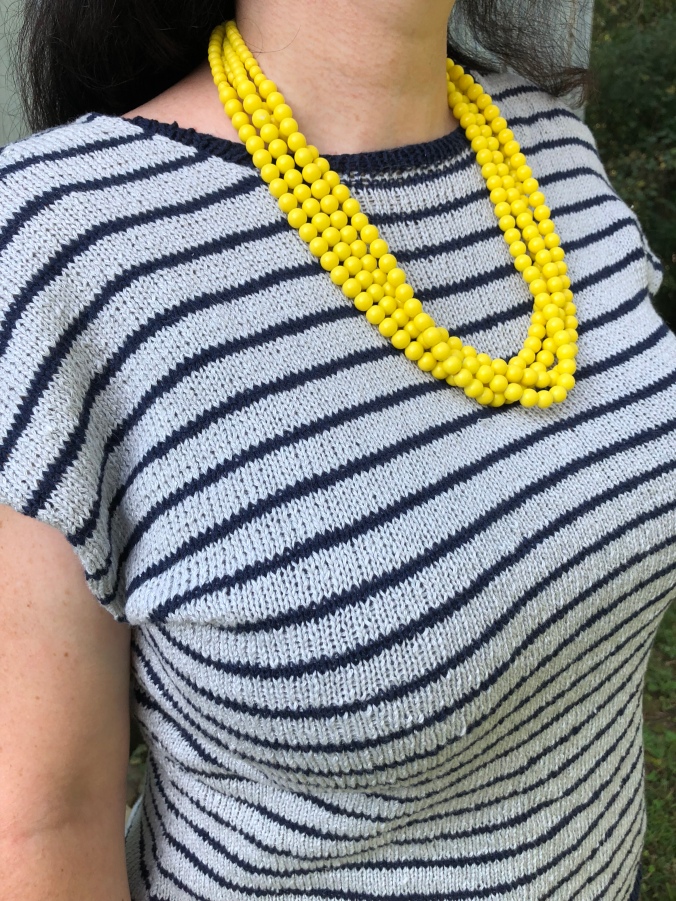 This was a fairly easy pattern to follow.  I thought I was going to have a hard time remembering to switch colors for the stripe pattern, but that was actually super easy!  I knit it in a size Large and the fit is very good.  As always, I went up a size on my needles to a size 4 to get the right gauge….. of course that was only after I bought the size 3 needles 😦 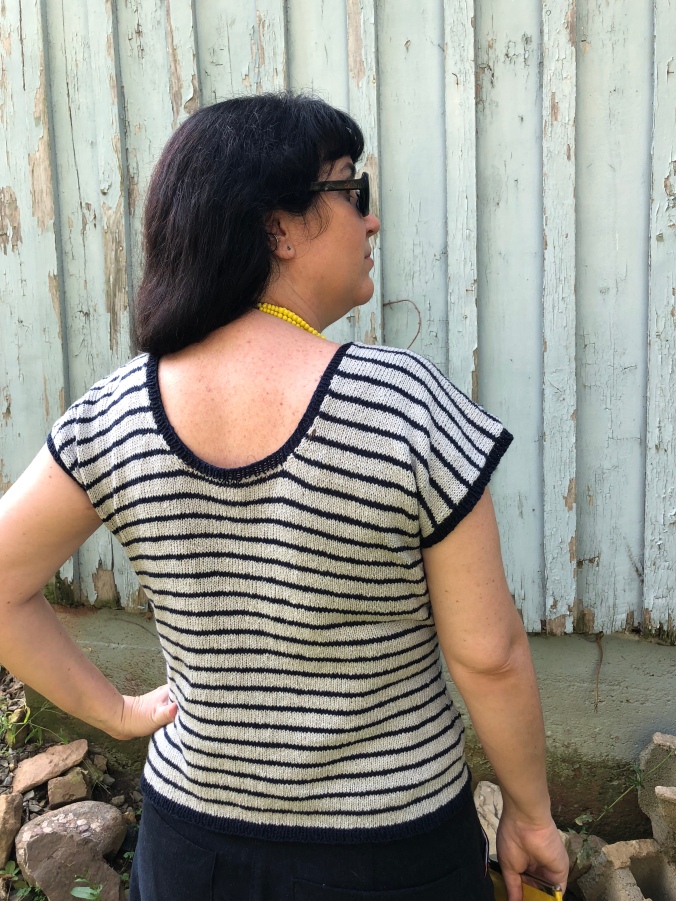 I used Lindy Chain yarn, because it was a lot cheaper than the suggested yarn, in Navy and Mist.  It wasn’t the original combination I wanted, but I think I actually like it better then the original Navy/Linen combo (they were out of Linen when I ordered).
The only issue I have so far discovered is that despite the linen/cotton yarn and the short sleeves this is still a sweater and it gets HOT!!  I walked around the historical Tree Streets neighborhood with a friend to get these pictures and by the end I was sweating up a storm! (or glisten- as a proper British woman once told me “Ladies do not sweat, they glisten”) 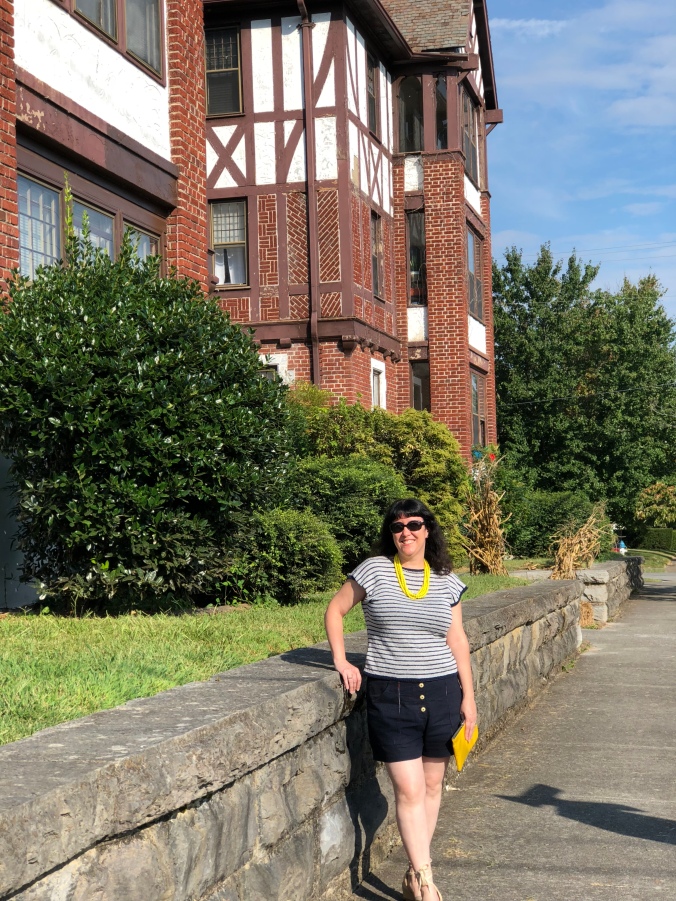 Overall, I’m quite pleased with the outfit…. and the fact that I actually finished the Outfit Along!!  I will definitely be remaking the shorts in a better fabric…. and probably give the pants a shot too 🙂

And BONUS- this will fulfill two from my Make Nine challenge!!  Knit a sweater (check) and I’m going to count my shorts as my Wild Card (double check)!  That brings me to five down 😀  Woohoo- over 50% complete!!

Don’t let the fall decorations fool you…. it was hot!

Whew! It has been a serious hot minute…..like two months hot minute!!  Let me catch you up on everything…..I went to D.C. for a work conference, kinda at the last minute: 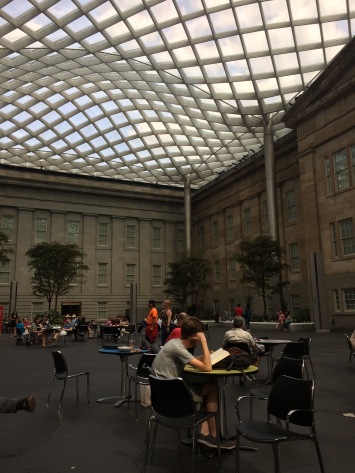 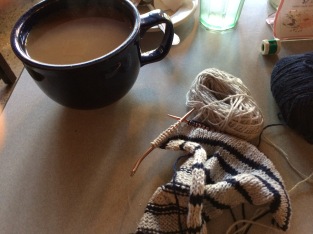 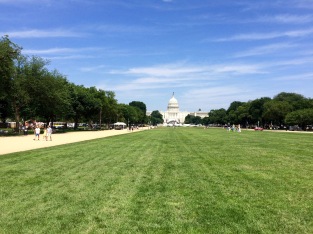 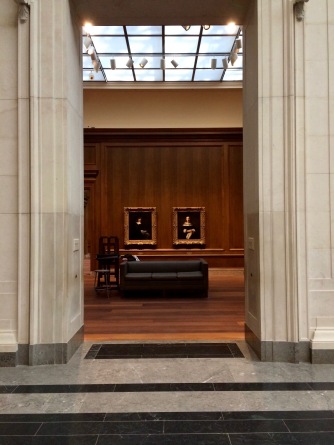 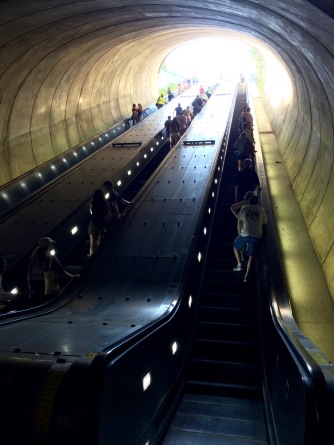 I found a LYS mere minutes from our hotel and bought awesome stuff 😀   ….and I also attended workshops and did work stuff 😉

I then almost immediately turned around and went to Sewcation!!! At the beach this year on Pawley’s Island 😀 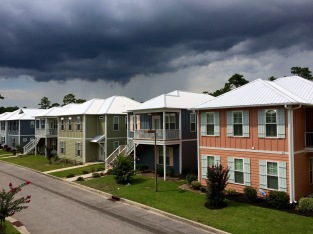 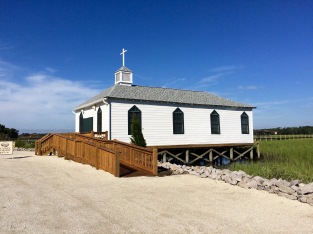 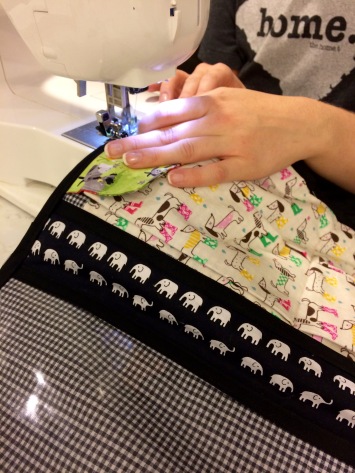 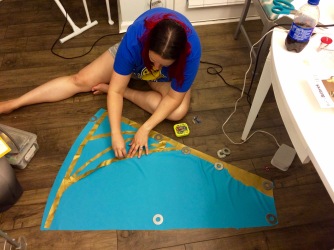 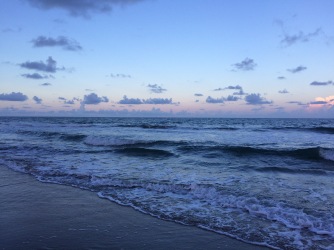 Work has been CRAZY this summer…. every year I imagine all the free time I’ll have to sew and work on projects…. and inevitably every year it seems to be crazy!

BUT between all that and especially at Sewcation I’ve been madly working away on my projects for the Outfit Along(s)!! 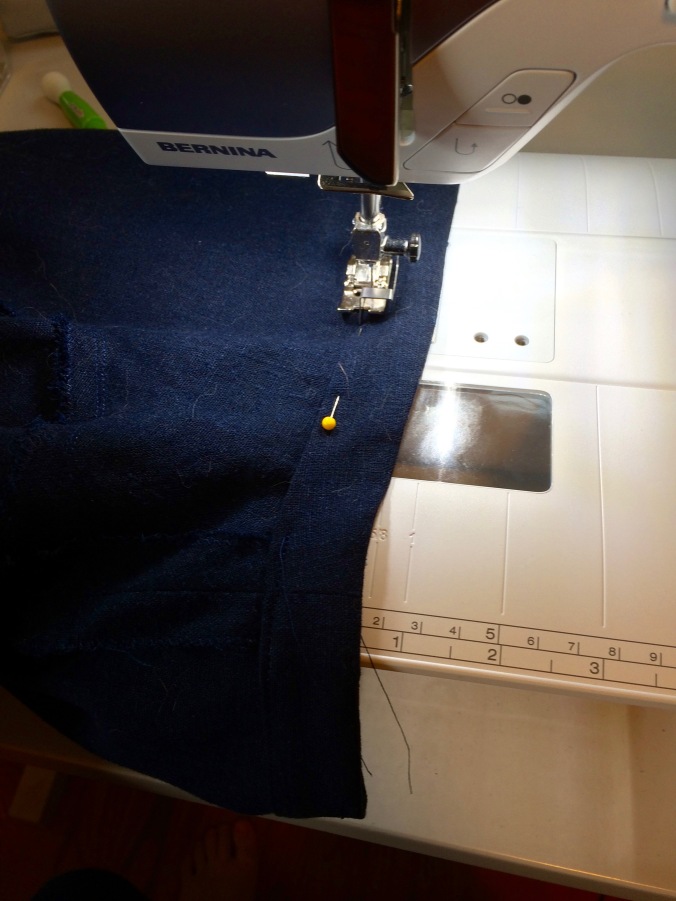 I have actually finished my Lander shorts by the deadline!! *Cue the celebratory music*  I will talk about them more in a future post….because unfortunately…. my Waters did not make it in time 😦 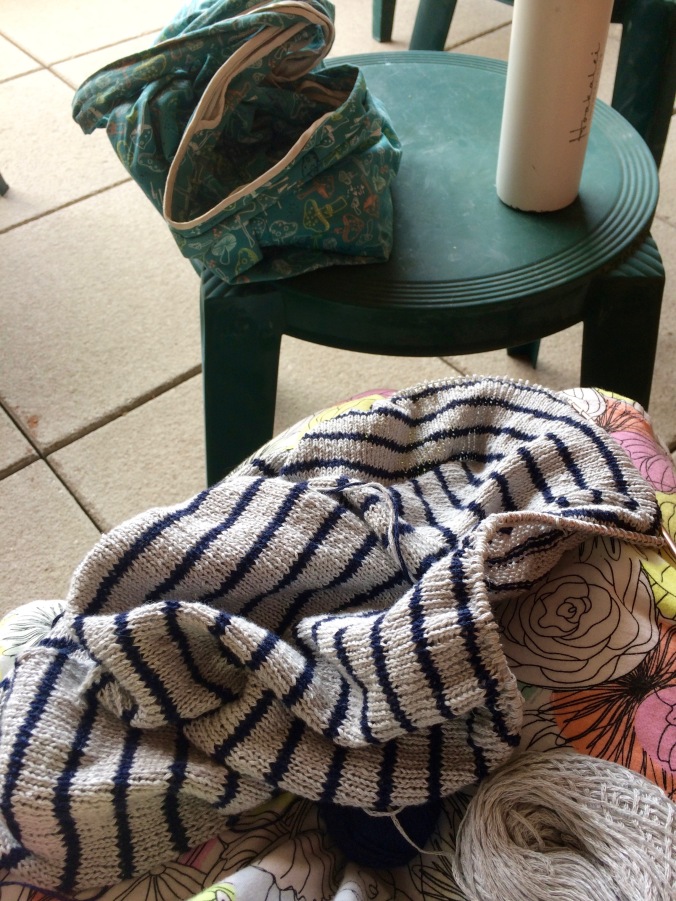 Speaking of the Outfit Along….. I’ve finally gotten started on the Kim Dress!! 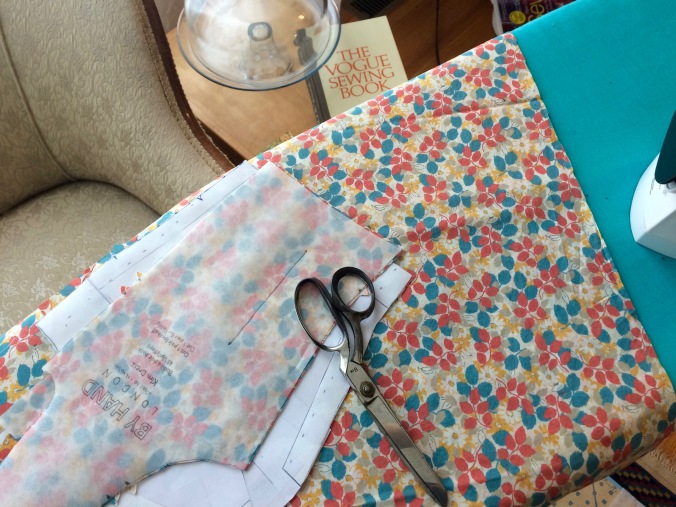 Yes, over a year late, but I’m hoping to actually finish the Outfit Along 2017 before it gets too cold to wear this somewhat summer-y dress….. I epitomize the saying better late than never 😉

…..and with that I leave you with a picture of El supervising some cutting…. she is quite the task master: 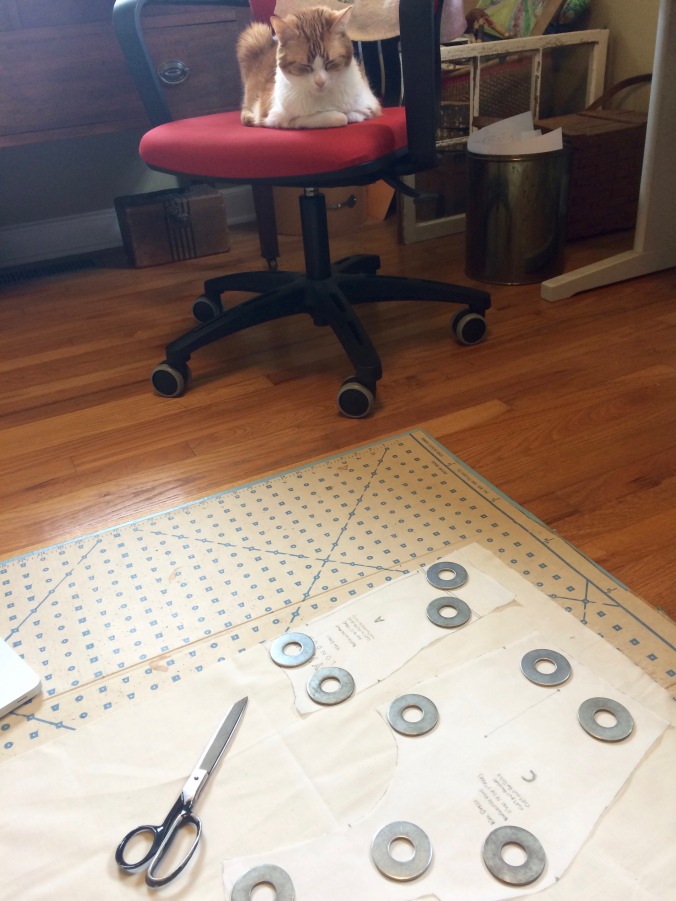 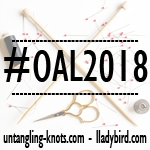